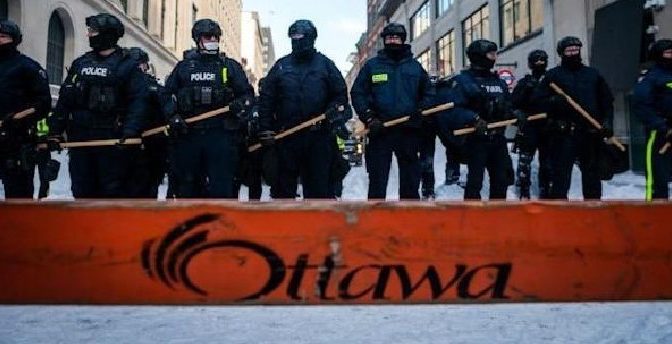 So, I have been following the trucker convoy protests pretty closely on social media. Watching all the videos of police brutality, looking over all the photographic evidence. What’s been interesting to following is the Ottawa Police twitter account, and the Canadian mainstream media. The Ottawa Police has just been tweeting out continuous lies, and the media just repeats those lies.

In my last post, I had a lot of photos and videos of the police running people over with horses, beating them with rifles, spraying them with tear gas, etc. The victims are peaceful unarmed protesters. But what’s new today is that one of the militarized RCMP police leaked a bunch of text messages from a group that many of them below to. So now we get to see the attitudes that Canada’s federal police force have to the people who pay their salaries through taxes.

In what appear to be authentic screenshots of the RCMP Musical Ride team currently in Ottawa to assist in the crackdown on peaceful protesters in the capital city, members brag about using brutal force.

Over the last 24 hours in Ottawa, police have deployed pepper spray and canisters on demonstrators, arrested dozens and trampled two people with horses.

Rebel News’ Alexa Lavoie was brutally struck with a baton, shot at close range with a pepper canister which then broke, burning her face and eyes.

In the chat, RCMP Musical Ride member, Andrew Nixon sends a picture of a pint of beer hoping for his chance to abuse protesters:

Member Robin Thibault remarks about accommodations police are being given in Ottawa:

“Time for the protesters to hear our jackboots on the ground”

[…]A member named Marca laughs off the prior night trampling of two demonstrators, one of which had a mobility scooter.

“”just watched the horse video – that is awesome”

“we should practice that manoeuvre”

Nixon is excited that someone shares his sense of cruelty and punishment. “Agreed!!!” he says. Three exclamation points.

And here’s what they are joking about, this video of Trudeau’s militarized police trampling the peaceful protesters in a cavalry charge. Their victim is an elderly woman with a walker. Trampling her is “awesome” and a “manoeuvre” (sic) for them to “practice”, according to the RCMP text messages.

The elderly, disabled woman they ran down with their horses pays their salaries. That’s how the police get paid – through the taxes of law-abiding citizens.

The Ottawa Police Twitter account is lying constantly. They tweeted out that they are not using gas on the protesters. Except, in the leaked messages, you can see the RCMP officers talking about equipping themselves with gas masks. And then there is the video evidence of the police using gas on protesters – at point blank range: 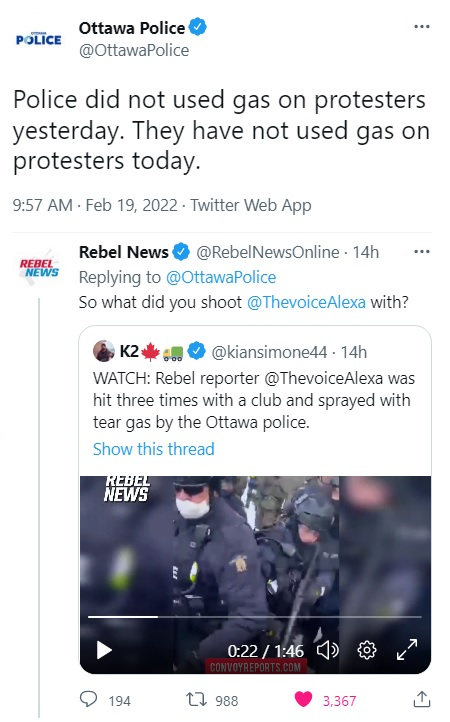 Here’s a closer look at the weapon, and the gas cannister: 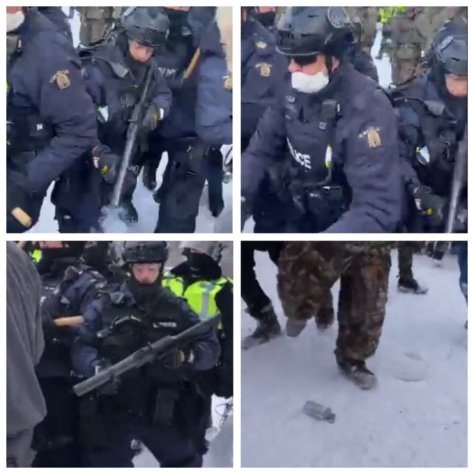 You can watch the video right here. Notice how the other police quickly grab the gas cannister and then block the people filming their actions. That concealment of their actions is repeated in so many of the videos I’ve seen.

Can you have morality without God?

Canada has been extremely secular for decades. Their elites didn’t think it would break the fabric of society to destroy the religious foundation of their country. But you can’t help yourself to human rights and morality on an atheistic worldview. The theistic foundation for morality is gone, on atheism. An atheist doesn’t keep the morality of Jesus, after taking God out.

Canada’s secular left thugs aren’t any better than Stalin’s thugs or Mao’s thugs or Hitler’s thugs. They just follow orders. They aren’t capable of reasoning about morality. When you read those text messages, that’s what you’re getting there. Atheist morality. It’s down on the level of animals. People who think that the universe is an accident, and human beings are machines made out of meat, are not capable of moral behavior.

The police in Canada is not unbiased. Canada is notorious for ignoring crimes committed by the secular left. Certain groups are exempt from the laws. Police in Canada ignore violent crime, arson, etc., as long as it’s committed by people in groups who support the Liberal Party. Just like in every communist country. They are there to do the dirty things that their leaders order them to do, so that their leaders will stay in power.

Canada is not a country you want to visit. Their police force is not honest. You would not visit a dictatorship like North Korea or Zimbabwe. You should not visit Canada, either. It’s a dangerous, lawless dictatorship. They have a dictator, and a cult of personality around him. They’ll freeze your finances. Damage or steal your property. Gas you. Punch you. Hit you with their guns. Shoot you at point blank range. Arrest you. Trample on your human rights, then trample on you. Then they’ll lie about it on social media, and their news media will cover it up. Don’t go there.