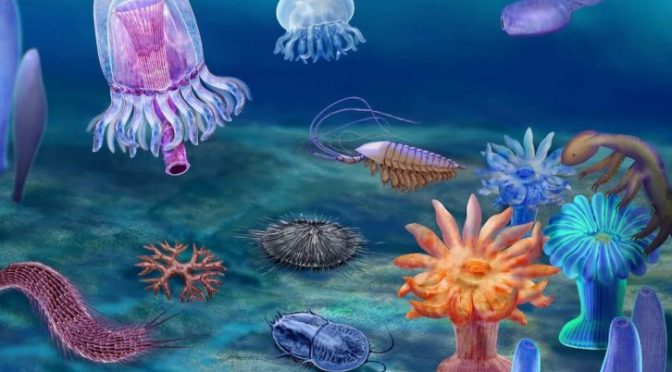 Access Research Network is a group that produces recordings  of lectures and debates related to intelligent design. I noticed that on their Youtube channel they are releasing some of their older lectures and debates for FREE. So I decided to write a summary of one that I really like on the Cambrian explosion. This lecture features Dr. Stephen C. Meyer and Dr. Marcus Ross.

The lecture is about two hours. There are really nice slides with lots of illustrations to help you understand what the speakers are saying, even if you are not a scientist.

Here is a summary of the lecture from ARN:

The Cambrian explosion is a term often heard in origins debates, but seldom completely understood by the non-specialist. This lecture by Meyer and Ross is one of the best overviews available on the topic and clearly presents in verbal and pictorial summary the latest fossil data (including the recent finds from Chengjiang China). This lecture is based on a paper recently published by Meyer, Ross, Nelson and Chien “The Cambrian Explosion: Biology’s Big Bang” in Darwinism, Design and Public Education(2003, Michigan State University Press). This 80-page article includes 127 references and the book includes two additional appendices with 63 references documenting the current state of knowledge on the Cambrian explosion data.

The term Cambrian explosion describes the geologically sudden appearance of animals in the fossil record during the Cambrian period of geologic time. During this event, at least nineteen, and perhaps as many as thirty-five (of forty total) phyla made their first appearance on earth. Phyla constitute the highest biological categories in the animal kingdom, with each phylum exhibiting a unique architecture, blueprint, or structural body plan. The word explosion is used to communicate that fact that these life forms appear in an exceedingly narrow window of geologic time (no more than 5 million years). If the standard earth’s history is represented as a 100 yard football field, the Cambrian explosion would represent a four inch section of that field.

For a majority of earth’s life forms to appear so abruptly is completely contrary to the predictions of Neo-Darwinian and Punctuated Equilibrium evolutionary theory, including:

After reviewing how the evidence is completely contrary to evolutionary predictions, Meyer and Ross address three common objections: 1) the artifact hypothesis: Is the Cambrian explosion real?; 2) The Vendian Radiation (a late pre-Cambrian multicellular organism); and 3) the deep divergence hypothesis.

Finally Meyer and Ross argue why design is a better scientific explanation for the Cambrian explosion. They argue that this is not an argument from ignorance, but rather the best explanation of the evidence from our knowledge base of the world. We find in the fossil record distinctive features or hallmarks of designed systems, including:

When we encounter objects that manifest any of these several features and we know how they arose, we invariably find that a purposeful agent or intelligent designer played a causal role in their origin.

I learned a lot by watching great lectures from Access Research Network. Their YouTube channel is here. I recommend their origin of life lectures – I have watched the ones with Dean Kenyon and Charles Thaxton probably a dozen times each. Speaking as an engineer, you never get tired of seeing engineering principles applied to questions like the origin of life.

If you’d like to see Dr. Meyer defend his views in a debate with someone who reviewed his book about the Cambrian explosion, you can find that in this previous post.

The Cambrian explosion lecture above is a great intermediate-level lecture and will prepare you to be able to understand Dr. Meyer’s new book “Darwin’s Doubt: The Explosive Origin of Animal Life and the Case for Intelligent Design“. The Michigan State University book that Dr. Meyer mentions is called “Darwin, Design and Public Education“. That book is one of the two good collections on intelligent design published by academic university presses, the other one being from Cambridge University Press, and titled “Debating Design: From Darwin to DNA“. If you think this lecture is above your level of understanding, then be sure and check out the shorter and more up-to-date DVD “Darwin’s Dilemma“.

4 thoughts on “Stephen C. Meyer and Marcus Ross lecture on the Cambrian explosion”