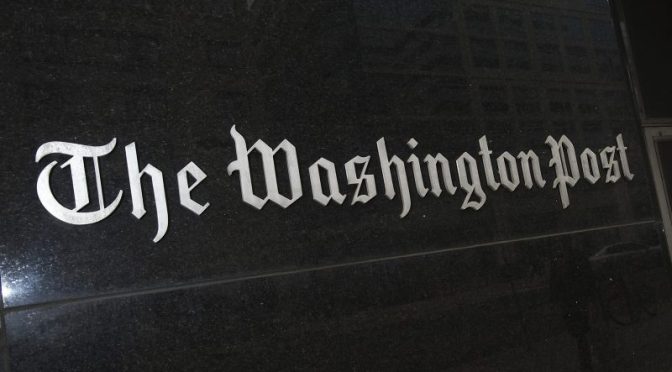 The Washington Post made a massive correction Monday to a January report about a phone call between then-President Donald Trump and a Georgia elections investigator, as the liberal paper admitted multiple quotes attributed to Trump based on an anonymous source were inaccurate.

The corrected story was a hot topic on cable news and talk shows that helped spread the Post’s flawed report and media watchdogs feel it points to larger problems with agenda-driven anonymous sources and liberal outlets that rush to “confirm” them.

[…]The Post initially reported Trump had told an official working in Georgia Secretary of State Brad Raffensperger’s office to “find the fraud” in the state, which he lost narrowly to Joe Biden, and that she would be a “national hero” if she did.

However, a newly emerged recording of the Dec. 23 call found he didn’t use those words. Instead, Trump said she would be “praised” when the “right answer comes out” and encouraged her to closely examine mail-in ballots in heavily blue Fulton County.

The original headline was “‘Find the fraud’: Trump pressured a Georgia elections investigator in a separate call legal experts say could amount to obstruction.” They changed the headline when they made the correction. Other news outlets spread the lies. The article was used in the oral arguments recent attempt to impeach Trump. People saw it on TV, and they believed it.

It happens often. The New York Times had to correct a story that claimed that Trump supporters bludgeoned a police officer to death with a fire extinguisher. That was later found to be false and retracted, but again, the damage was already done. The news media ran with the lie, and it was used in the impeachment. Again, people saw it on TV, and they believed it.

The news media likes to say that this was just an honest mistake, but the mistakes always go against conservatives. When you look at the political donations of people in the news media, it’s almost entirely going to Democrats. They’re using their power to lie to the public, so they get their candidates elected. And then the Big Tech social media companies rely on the liars to “fact check” the rest of us, and censor us for telling the truth.

Remember that the entire Trump-Russia collusion news story also relied on anonymous sources. But in the end, it turned out that Democrats paid for the dossier that was used by the FBI to justify spying on Trump. I don’t remember anyone in the news media facing consequences for running a fake story for months and months.

By the way, the Washington Post is owned by the CEO of Amazon. I’m already trying to reduce my dependence on Amazon. You might want to think about it. He’s not a good person, and we shouldn’t be making him rich.