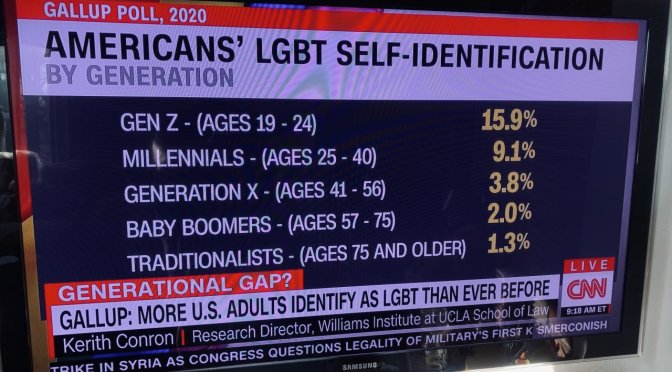 I’m anxiously waiting for the most conservative states to introduce legislation that would allow children who are manipulated into changing genders to sue. You might think that it sounds like a crazy idea, but other countries who are further along are doing it.

Here’s a story from the UK Times about what’s happening in the socialist UK, where they have government-run health care.

The Tavistock gender clinic is facing mass legal action from youngsters who claim they were rushed into taking life-altering puberty blockers.

Lawyers expect about 1,000 families to join a medical negligence lawsuit alleging vulnerable children have been misdiagnosed and placed on a damaging medical pathway.

They are accusing the gender identity development service [GIDS] at the Tavistock and Portman NHS Trust of multiple failures in its duty of care.

This includes allegations it recklessly prescribed puberty blockers with harmful side effects and adopted an “unquestioning, affirmative approach” to children identifying as transgender.

The law firm Pogust Goodhead has since announced it is pursuing a group litigation order against the trust, which has treated 19,000 children with gender dysphoria (the feeling that one’s emotional and psychological identity differs from one’s birth sex) since 1989.

Former patients given puberty blockers are joining the “class action” lawsuit and papers are due to be lodged at the High Court within six months.

Tom Goodhead, chief executive of Pogust Goodhead, told The Times: “Children and young adolescents were rushed into treatment without the appropriate therapy and involvement of the right clinicians, meaning that they were misdiagnosed and started on a treatment pathway that was not right for them.

“These children have suffered life-changing and, in some cases, irreversible effects of the treatment they received . . . We anticipate that at least 1,000 clients will join this action.”

That’s a 10,000 foot view of what’s going on, but this other article from the UK Times shows you what it is like for one of those victims:

A woman who had testosterone injections and a mastectomy at the Scottish equivalent of the Tavistock clinic before “detransitioning” back has said that its children’s service should be closed.

Sinead Watson, now 31, was treated after self-referring to the Sandyford clinic in Glasgow when she was 24.

She later realised that transitioning had not helped her depression, anxiety and self-harm. She wants Sandyford’s young people’s gender service, for those under 18, to close, following the fate of the gender identity development service at the Tavistock and Portman NHS Foundation Trust in London, which will shut next year.

Watson, from Glasgow, told The Times: “I went to Sandyford as a 24-year-old woman with a long history of depression, anxiety, self-harm, alcohol abuse and suicidal ideation.

“I did not have gender dysphoria prior to my teens. Yet for some reason, the clinic thought it was appropriate to ignore all of these other issues. Within a matter of months, I was put on irreversible cross-sex hormones.”

[…]“I met with a gender specialist who asked me about my childhood,” she said. “I told him that I was a perfectly normal little girl who didn’t have any gender issues at all. They contacted my GP with my permission and got access to all of my medical history. They weren’t really interested in exploring the depression, the anxiety or the self-harm. All they were interested in was talking about my gender crisis.”

After three or four appointments over about five months, Watson said, she was prescribed and began injecting testosterone every three weeks. Every five months, she said, she was invited for an appointment at which specialists would check her blood pressure and hormones. “There was a bit of small talk, but it wasn’t like counselling or therapy sessions,” she said. “I was out the door in 20 minutes.”

Sandyford referred Watson, by then living as Sean, to a hospital in Manchester for a mastectomy in 2017. This was a little later than the clinic had intended, she said, because of the numbers of trans men it was sending there. “I was so consumed by my desire that this transition was going to make me feel so much better, that I couldn’t wait,” she said.

After the surgery, however, she found “I had taken testosterone, I had undergone surgery and I was talking about wanting to get a hysterectomy. But I was still just as depressed and as f***ing miserable as I had been.”

Asked whether there had been a tipping point, Watson said: “Going into the operating room with breasts then the next minute they’re gone … it is such a big change and you know you can’t undo it . . . I just kind of thought … what have I done?”
By 2018 Watson “fully regretted” transitioning, she said, but it was more than a year before she started detransitioning. She has not been back to the clinic since before her mastectomy.

I wrote about another case from the UK, where the child was on the transformer path after just 2 and a half hours of counseling.