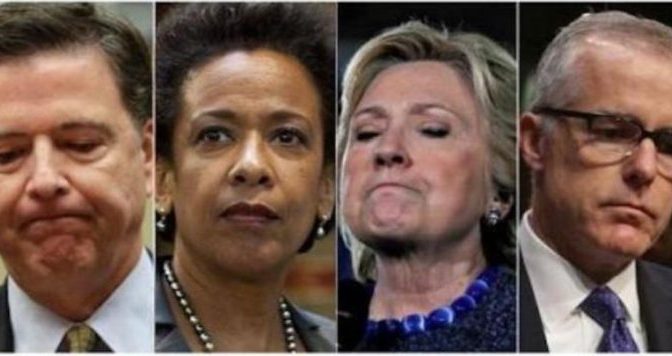 I read a billion articles trying to find a summary in plain English for everyone to keep up, and here is what I found.

Trump was right. Right all along.

Hillary Clinton’s lawyers hired a tech firm to “infiltrate” servers not only at Trump Tower, but at the White House, as part of their effort to falsely tie President Trump to Russia. That’s the explosive revelation found in a new filing by Special Counsel John Durham.

Clinton lawyer Michael Sussman went to the FBI with allegations that Trump was tied to the Putin-controlled Alfa Bank. (Sussman has been charged with lying to the FBI when he said he wasn’t working for any client … let alone Trump’s opponent.)

Hillary would weaponize these allegations in the last days of the 2016 campaign.

It’s time for Trump to answer serious questions about his ties to Russia.

To boost the Trump-Russia myth, the Clinton Campaign ordered both Sussman, and his election-rigging partner Mark Elias, to hire a tech firm. Its job? To fake Trump connections to Alfa Bank.

They spied on Trump AFTER he became President:

What’s new in Durham’s latest filing is that these efforts extended to grabbing computer data from the White House itself after Trump took office.

In connection with these efforts, Tech Executive-1 – (Identified as Rodney Joffe) exploited his access to non-public and/or proprietary Internet data. (Joffe) also enlisted the assistance of researchers at a U.S.-based university (Identified as Georgia Tech) who were receiving and analyzing large amounts of Internet data in connection with a pending federal government cybersecurity research contract.

Durham says that the government will prove at Sussman’s trial how Joffe was able to spy on the activities of Trump’s computers at Trump Tower and his Central Park West apartment. And (most chillingly) at the “Executive Office of the President of the United States.” That’s the White House.

[…]Trump Administration official Kash Patel spent years working for Rep. Devin Nunes to unravel the Trump-Russia hoax. He told Fox the filing “definitively shows that the Hillary Clinton campaign directly funded and ordered its lawyers at Perkins Coie to orchestrate a criminal enterprise to fabricate a connection between President Trump and Russia.”

Per Durham, this arrangement was put in motion in July of 2016, meaning the Hillary Clinton campaign and her lawyers masterminded the most intricate and coordinated conspiracy against Trump when he was both a candidate and later President of the United States, while simultaneously perpetuating the bogus Steele Dossier hoax.

All the Democrat elites knew:

In 2016 — before Trump was elected — the FBI knew the whole Trump-Russia thing was garbage. That means that on January 5, 2017, when Barack Obama, Joe Biden, James Comey, James Clapper, John Brennan, Loretta Lynch and Susan Rice met in the White House to discuss the Trump Russia investigation, every single person in that room knew better. Each one of them knew that the “Russia collusion” was a Clinton-concocted hoax.

And yet they all agreed that the Trump investigation would continue, and he would only be told by James Comey about the Steele Dossier’s “salacious details.”

Here’s Hillary Clinton trumpeting the results of the scheme on Twitter just days before the 2016 election: 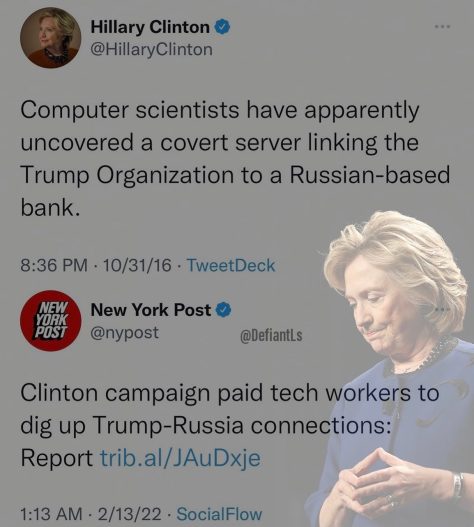 The Federalist puts it into perspective:

Mark Meadows, a former congressman who also served as chief of staff for Trump, soon joined the fray, tweeting out, “They didn’t just spy on Donald Trump’s campaign. They spied on Donald Trump as sitting President of the United States. It was all even worse than we thought.”

Kash Patel, who served as lead investigator for then-House Intelligence Committee Chairman Devin Nunes, added that the motion “shows that the Hillary Clinton campaign directly funded and ordered its lawyers at Perkins Coie to orchestrate a criminal enterprise to fabricate a connection between President Trump and Russia.”

Nunes concurred, telling The Federalist on Sunday, “There was no limit to the brazenness and vindictiveness of the Democrats’ illegal spying operation.” “In all my years as a member, ranking member, and chairman of the House Intelligence Committee,” Nunes added, “this is the single biggest threat to American democracy I’ve ever seen.”

I think it’s interesting that one of the people involved (Jake Sullivan) is working in the Biden administration right now:

President Joe Biden’s national security adviser Jake Sullivan was another key player in promoting the Russian collusion hoax, and he should be fired for scamming Americans on Clinton’s behalf.

Sullivan, then-senior policy adviser to Hillary for America, boosted the Alfa Bank allegations with hopes that Clinton would win the 2016 election.

In a press release touting the bogus story about a Trump Tower server communicating with Russia, Sullivan claimed that the information, which we now know was gathered by a firm employed by Clinton’s team, “could be the most direct link yet between Donald Trump and Moscow.”

“It certainly seems the Trump Organization felt it had something to hide, given that it apparently took steps to conceal the link when it was discovered by journalists,” Sullivan said in a statement amplified by Clinton on Twitter.

[…]Sullivan, a Steele dossier truther, used his ties with the corporate media to spread falsehoods about Trump and Russia.

[…]Sullivan, a key player in handicapping Trump’s ability to later conduct foreign policy during his presidency, is now one of the top officials weighing in on U.S. foreign policy. He’s a dominant voice in the U.S. response to Russia’s rift with Ukraine. He’s also the same guy who helped botch the deadly U.S. Afghanistan withdrawal.

He was rewarded for what he did.

I hope everyone understands that the 2022 mid-term elections have already started. Now is the time for everyone who wants to get to the bottom of this to share news stories from The Federalist, Breitbart, The Daily Signal, etc. on social media. We can’t afford to be ruled by corrupt, immoral secular leftists.

5 thoughts on “Report: Hillary Clinton was the mastermind behind the Trump-Russia collusion hoax”