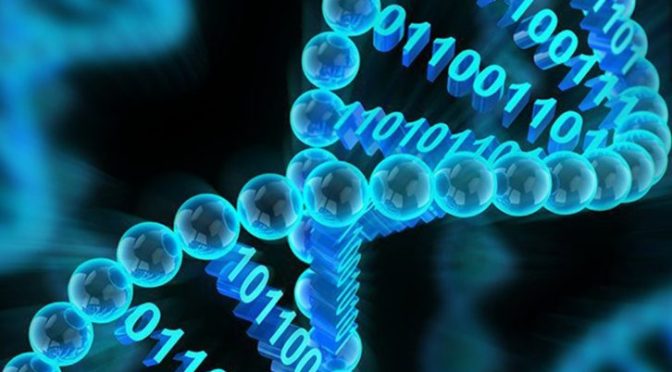 Here is the PR / spin definition of theistic evolution:

Evolutionary creation is “the view that all life on earth came about by the God-ordained process of evolution with common descent. Evolution is a means by which God providentially achieves his purposes in creation.” This view, also called theistic evolution, has been around since the late nineteenth century, and BioLogos promotes it today in a variety of religious and educational settings.

And here is the no-spin definition of theistic evolution:

As Dr. Stephen Meyer explains it, the central issue dividing Bio-Logos writers from intelligent design theorists is BioLogos’s commitment to methodological naturalism (MN), which is not a scientific theory or empirical finding, but an arbitrary rule excluding non-material causation from the outset. “Unfortunately,” Meyer writes,

methodological naturalism is a demanding doctrine. The rule does not say “try finding a materialistic cause but keep intelligent design in the mix of live possibilities, in light of what the evidence might show.” Rather, MN tells you that you simply must posit a material or physical cause, whatever the evidence.

What this means, according to BioLogos’s own epistemology, is that God is objectively undiscoverable and unknowable—a tenet that sits squarely at odds with Christian orthodoxy, which has for centuries held that God is clearly discernible in the natural world (e.g., Romans 1:20). Obviously, this is theologically problematic, but Meyer also points out that theistic evolution faces problems from a scientific standpoint as well, as the technical literature among evolutionary biologists is moving away from the Darwinian mechanism.

Whenever I talk to theistic evolutionists, I try to stop them from talking about the Bible or their faith, because that’s not what is interesting to me. I don’t really care about their history as a religious person, or where they go to church, or who their pastor is. When I talk about origins and evolution, I only care about the science. What the ordinary process of scientific inquiry tells us about nature? Does nature have the capacity to create all of the varieties of life without any intelligent agency playing a role? Or, are there parts of nature that are similar to computer programs, blog posts, and term papers, where the best explanation of the effect is an intelligent agent choosing how to arrange the parts to achieve functionality?

I don’t accept molecules-to-man unguided evolution. This is not because I start with faith and let faith override the findings of science. It’s because I think that if you look at specific areas of natural history, there is clear evidence of intelligent agency, such as in the origin of life, or the Cambrian explosion. These effects in nature are well-studied and well-understood, and they look much more like the code that a computer scientist (like me) writes than the simplistic “order” created by wind erosion or crystalline patterns or anything the blind forces of nature could produce. Blind forces are observed to make small changes – short or long finch beaks, fruit flies with 4 wings and no balancers, bacterial resistances.

What’s also interesting is how often theistic evolutionists drop the theism but keep the evolution.

Consider this article about Stephen Matheson from Evolution News:

Biologist Stephen Matheson is a longtime critic of the theory of intelligent design. His extensive attacks on Stephen Meyer’s Signature in the Cell, for one, ranged from the substantive to the trivial and personal. The tone was frequently…abrasive, and we responded at the time. With Arthur Hunt, Dr. Matheson has debated Dr. Meyer in a forum at Biola University. Formerly a professor at an Evangelical Christian school, Calvin College, Matheson is still listed as a Blog Author at the theistic evolutionary website BioLogos, where it notes that he enjoys “explor[ing] issues of science and Christian faith.”

Well, his theistic evolutionary explorations have now terminated. As he reports on his personal blog page, where he took a hiatus of more than five years along with a break from his teaching, he is “happily” no longer a Christian.

OK. Now that’s just one case, but what about Howard Van Till, also of Calvin College?

Salvo magazine takes a look at what he wrote in a recent book:

In what follows I shall use the term “naturalism,” when unqualified, to represent neither more nor less than the rejection of supernaturalism. Stated positively, naturalism is committed to the belief that all events that occur within this Universe are consistent with and adequately explained by the system of natural causes. This commitment necessarily entails the additional belief that the system of natural causes is fully adequate to account for all events that transpire. Focusing on the issue of the Universe’s formational economy, we can say that naturalism—as here defined -entails the RFEP.

He now gives presentations for atheist groups entitled “From Calvinism to Freethought”. Freethought is a euphemism for atheism.

Now, for the big three Western monotheistic religions: Christianity, Judaism and Islam. To deny supernaturalism IS to deny the robust theism present in the world’s big three monotheistic religions. Van Till denies theism as commonly understood now. And again, this isn’t because of the science. His heavy handed naturalistic assumption squashed out any kind of serious inquiry into areas like the origin of the universe, the cosmic fine tuning, the origin or life, the Cambrian explosion, biological convergence, so-called junk DNA, deleterious mutations, and so on. Places where you can see that naturalistic forces cannot do the creating that Van Till has faith that they can.

I don’t accept any kind of macro-evolution – evolution of body plans or organ types. My problem with evolution is not Bible-based, it’s science-based. If the science shows the need for intelligent causes, and I think it does, then I think that the naturalists need to adjust their assumptions and pre-suppositions to match the evidence. On the Internet have ball sorts of programs written in different computer languages. They are evidence for programmers. In nature, we have DNA and proteins and sudden origin of body plans, that’s evidence for a programmer, too.

3 thoughts on “Can a person believe in both God and Darwinian evolution?”