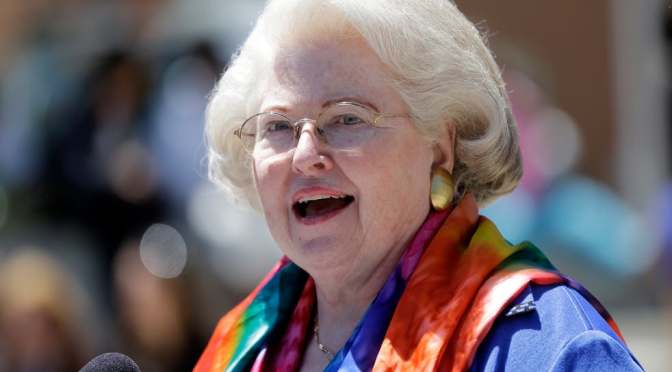 Sarah Weddington argued for Roe v. Wade at the Supreme Court, and the majority of the male justices agreed with her. So, I thought it would be interesting to dig around and see what kind of woman she was. What were her motives for legalizing abortion?

First, a bit about her background. She was a United Methodist pastor’s kid, and a leader in her church.

Sarah Ragle was born on February 5, 1945, in Abilene, Texas, to Lena Catherine and Herbert Doyle Ragle, a Methodist minister. As a child, she was… president of the Methodist youth fellowship at her church, played the organ, sang in the church choir…

Weddington graduated with a bachelor’s degree in English from McMurry University… [S]he entered the University of Texas Law School and graduated in 1967. In 1967, during her third year of law school, Weddington conceived with Ron Weddington and travelled to Mexico for an illegal abortion. From 1968 to 1974, she was married to Weddington. After her divorce, Sarah continued to live alone in Austin, Texas.

She had an illegal abortion in Mexico.

This is the kind of man she chose to have unprotected sex with before marriage:

Ron Weddington, one of the attorneys who drafted the brief for abortion rights in Roe V Wade, wrote a private letter to President-elect Bill Clinton arguing for the state to use abortion as population control. This letter was written in 1992:

“[Y]ou can start immediately to eliminate the barely educated, unhealthy and poor segment of our country.

[…]It’s time to officially recognize that people are going to have sex and what we need to do as a nation is prevent as much disease and as many poor babies as possible.

Ron Weddington is the husband of Sarah Weddington, one of the two lawyers who argued for abortion in Roe Vs. Wade.

She chose this man out of all the men in the world, probably because he wasn’t going to lead her spiritually or morally. She wanted to escape Christian morality and to escape being judged by Christians for her choice of man, and her choices with sex.

This is an interesting insight into her motives from a student admirer:

One of my all-time favorite lecturers was Sarah Weddington, the attorney who successfully argued the Roe v. Wade decision.

[…]After a couple of years, I… secured a date for my mentor to speak on campus. The lecture was brilliant. The event was successful, even though a few pro-life demonstrators stood quietly protesting outside the venue.

After the event, a group of students and I took her to dinner and were entertained by more exciting, interesting stories. Over dessert, I asked, “whatever happened to Roe?”

“She’s a stupid piece of white trash. She’s pro-life and a Christian,” she snarled throwing in a few decidedly ungracious and unrepeatable curse words. “She’s a piece of trash. She was stupid when we found her and she’s worse now.”

Most people know that Weddington lied about “Roe”. Roe never had an abortion. Her child was given up for adoption. Weddington and Coffee just used Roe to get the abortion law they wanted.

By the way, Linda Coffee was also attending church at the time she filed the abortion legal challenge, as the pro-abortion Dallas Morning News reports. Today, Linda Coffee is living with a woman. No husband, and apparently no kids – just like Weddington. This is the feminist vision, complete with lesbianism, sold to women in those left-wing seminaries we call “universities”. And it’s worse in non-STEM departments.

After arguing for abortion, Weddington eventually became an advisor to President Jimmy Carter and pushed for research on breast cancer, a disease from which she is a survivor. Ironically, dozens of studies have linked induced abortions to an increasing risk of breast cancer and a top researcher says more than 300,000 women have died from breast cancer as a result of having abortions.

I think her abortion crusade was just her attempt to make what she did legal, so that she would no longer be judged for her bad choices with men, sex and pregnancy.

The hero of young feminists

Why do people listen to people like Weddington, who have failed at life so badly? Is she really a hero of “women’s rights”? Sex-selection abortions caused the deaths of 46 million unborn girls in India. Is that a triumph of “women’s rights”? All pro-abortion women support sex-selection abortions – and they are most often used on unborn girls, who are the “wrong sex”.

Most Christian men don’t have the courage to challenge women like Weddington about their atheist, feminist, socialist worldviews. Look at the photo of the good United Methodist pastor’s kid and church leader. She’s so pretty. Men are very foolish. They judge women by their appearances. A pretty girl must be good, so they don’t want to disagree with her or persuade her or lead her on moral or spiritual issues.

Christian / conservative men think it’s “chivalrous” to make pretty women into victims. That’s why she was probably never confronted about atheism, feminism and socialism by her United Methodist pastor parents or church leaders. To confront a woman about her beliefs with reason and evidence is “harsh” and “unchivalrous”. Then at college, she was indoctrinated by those English professors and their red marking pens. She wanted good grades, so she wrote what they told her to write. She had never learned to develop her own views with reason and evidence. She just wanted to be liked. This was not a STEM program connected to the real world. She never formed her feminist pro-abortion convictions by writing code or doing lab work. Her non-STEM education was just indoctrination. Indoctrination that left her a murderer, a spinster and separated from God for eternity.

Nothing that’s going on in our churches teaches men to challenge young women about the atheism, feminism and socialism. The pious, chivalrous United Methodist pastors and parents were in a position to stop Sarah Weddington. But her parents and pastors failed to defeat ideologies like atheism, feminism and socialism with her. They were probably just focused on piety, feelings and community. They were probably just happy to have a pretty girl in their home and church. They probably didn’t want her to stress her out with having to learn logic, evidence or apologetics. They probably thought women were too dumb to learn those things, and put them into practice. Just send her to English professors and law school to be radicalized.