I thought it might be a good idea to write up something about D-Day in order to help people understand some of our military history, and to put the spotlight on some real heroes. I don’t regard artists, athletes, dancers, singers, actors, or other celebrities as heroes. It really alarms me that so many people know more about these fake heroes than they do about real ones.

For one thing, many people don’t understand how British and American libertarian isolationism made World War 2 into a much bigger mess than it needed to be. As historian Victor Davis Hanson explains in the lecture I linked below, the Allied nations were much stronger and better equipped than the Axis nations before the war started. The Axis nations developed better weapons after the war started. But Germany and Japan didn’t think that the Allied nations would do anything if they were aggressive. We know this from their writings and correspondence. They thought that British and Americans were just too scared of war to stop them.

Germany and Japan tested their hypothesis out by re-arming and annexing territory from their neighbors. Britain and America were led by libertarian isolationists, so they didn’t fight back. The aggressors correctly understood that libertarian isolationists didn’t have the will to oppose them, even if they were weaker than the Allies. But the more they re-armed and annexed territory, the stronger they became. The Allied nations waited too long to confront them. And that’s why World War 2 was much harder to win than it needed to be.

Here’s a very good lecture about the causes of World War 2 by an actual military historian, Victor Davis Hanson:

So, that’s the first point I wanted to make: libertarian isolationism causes wars. Although libertarians claim to oppose war, they actually cause war, due to their weakness in the face of evil. So who stops wars? People who favor a strong defense, and show a willingness to fight back against aggression are the ones who REALLY oppose wars. This is called “peace through strength”, and you can see it in action in the Cold War, where Ronald Reagan defeated the Soviet Union by making their aggression costly. 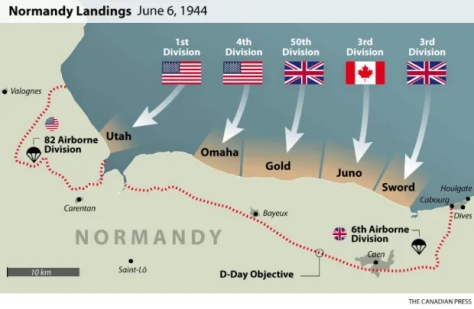 My second concern was to promote the real heroes of D-Day, over the fictional heroes of movies, fiction, music, dancing, sports, and other entertainment nonsense.

Here are the four heroes I chose:

Let’s take a look at each of them.

Major John Howard led elements of the British 6th Airborne Division to take two vital bridges southeast of Sword beach. He did this in order to prevent German socialist counterattacks coming from the east. After they took the bridges, they had to repulse German tanks with nothing more than their useless PIAT (Projector Infantry Anti-Tank) grenade launchers. The PIAT was nothing more than a grenade launcher powered by a coiled spring. It was very inaccurate, and only effective to 50 yards. But that’s all the British paratroops had to stop tanks, and they made it work. You can read about him in this book by Stephen E. Ambrose, entitled: “Pegasus Bridge: June 6, 1944“. This New York Times article tells the story in brief. He also is played by Richard Todd in the famous movie “The Longest Day“.

Lt. Col. Ben Vandervoort served with the 82nd Airborne Division. I read about how he lead an infantry attack against German Tiger tanks (!) and infantry in Stephen E. Ambrose’s book “Citizen Soldiers: The U.S. Army from the Normandy Beaches to the Bulge to the Surrender of Germany“.  Ben Vandervoort broke his ankle during the D-Day landing, but he insisted that the medic just “lace it up tight” so that he could supervise the attacking and holding of Ste. Mere Eglise, southwest of Utah beach, against a vastly superior enemy force.  This article tells about how he defended against elite German SS infantry and heavy Tiger tanks at Trois-Ponts, during the Battle of the Bulge. He was outgunned and outnumbered 20 to 1, and had just a few lightly-armed soldiers, two weak 57mm anti-tank guns and some bazookas. He is portrayed by John Wayne in the famous movie “The Longest Day“.

Brig. General Norman Cota is my favorite person in World War 2. At 51 years old, he nevertheless landed at  D-Day, and rallied terrified Army Rangers to follow him up the bluff, by telling them that Rangers ought to lead the way. “Rangers Lead The Way” later became the motto of the Army Rangers. He always led from the front, demonstrating how to attack a German machine gun position in a farmhouse to a group of American soldiers who were pinned down. He actually grabbed a bunch of grenades and led the assault team against a heavy machine gun! You can read about him in this short article and in Stephen E. Ambrose’s “D-Day: June 6, 1944: The Climactic Battle of World War II“. He is portrayed by Robert Mitchum in the famous movie “The Longest Day“.

Major Richard Winters served in the 101st Airborne Division. Winters led an assault against a superior force of heavy machine guns and 105mm field guns. His tactics were so brilliant that they are still studied at West Point today. You can see Richard Winters and Carwood Lipton in the HBO “Band of Brothers” series, or read this book by Stephen E. Ambrose entitled “Band of Brothers: E Company, 506th Regiment, 101st Airborne, from Normandy to Hitler’s Eagle’s Nest“, which is the basis for that series.

I hope this convinces you that military heroes are far more important than the “heroes” of fiction and entertainment. It’s alarming to me that people invest more and have more respect for characters in Hollywood science fiction movies, and other such make-believe nonsense. We need to be rooted in reality. In reality, men who fight and die fighting evil to protect your freedoms are the real heroes. People who take military history seriously are able to give respect and gratitude where it is due – a very important part of being a mature, moral human being.

One thought on “Meet four heroes of the D-Day invasion of Normandy on June 6th, 1944”