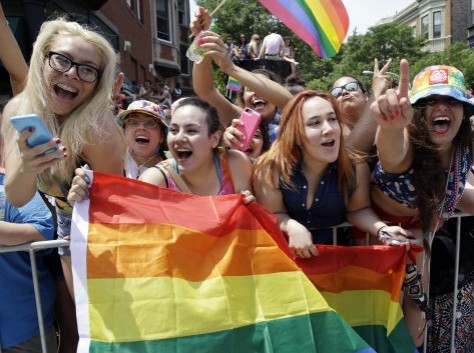 The Federalist reports on what researchers have found about the nature of same-sex attraction. Is it fixed? Or does it change over time? I think that gay activists would like everyone to believe that same-sex attraction is fixed, but to learn the truth, we should look at what the scientific research says.

This is so well established by now that scholars are busy publishing methods to measure frequency of sexual orientation change in massive longitudinal studies of youth and young adults. (I.e., How many times in nine years can we expect a homosexual sexual orientation to change? Is the change associated with lifestyle habits? Who changes more frequently: males or females?)

That basic fact was already settled science when Obergefell  came before the Supreme Court. Half a dozen rigorous studies could be cited from the late 1990s and early 2000s, but the most noteworthy probably remains a Cornell-led study published in 2007.

In this study, Dr. Rich Savin-Williams examined a representative sample of more than 12,000 American youth, following each from the age of 16 to 22. Rather than rely on an individual’s reconstruction of his or her past based on current identity, researchers met with subjects three times throughout the six-year period. Each time, they asked individuals (via a computer, to protect privacy) whether they had had a romantic attraction to a member of the opposite or same sex since their last interview.

This research is in agreement with previous research on identical twin studies reported by the prestigious science journal Nature:

When one identical twin is gay, there is about a 20% chance that the other will be as well. But because this rate is not 100%, it is thought that environmental factors play a role as well. One of the best characterized is the ‘older brother effect’: the chance of a man being gay increases by 33% for each older brother he has. The reason is not clear, although one hypothesis holds that the mother’s immune system begins to react against male antigens and alter the fetus’s development.

Whenever I hear gay activists complaining that they have no choice but to give in to their “innate, fixed, biological” sexual attractions, I always think about how I’ve never been married and have had to deal with sexual attraction to the opposite sex. As a Christian, there is simply no Biblical support for sex outside of marriage. So, that means that I’ve had to just live with not being allowed to act on my desires. In fact, this is the normal Christian life. There was a time when people had more skepticism about their feelings and desires, and they knew that self-control was a good thing. But now it seems as if everyone is so desperate to be liked that we tell everyone yes to everything that they feel like doing. We now consider every moral viewpoint as equal to any other – all the better to do what makes us feel happy. The important goal is that we all feel good right now, and who cares about the damage that our selfishness will cause down the road? We can just act surprised when that happens and pretend that there is no such thing as cause and effect. I can remember a time when Christians in particular had some suspicion about following your heart, because the heart was deceitful and selfish. I guess those days are over, and suddenly feelings are ruling over reason and self-control.

It’s pretty clear that not everything that a person feels like doing is good for them. A lot of decisions that people make to feel good right now lead to outcomes where they or the people who are depending on them will be harmed. For example, lots of people feel like staying home from a school exam, or staying home from their jobs, or drinking alcohol all night, or taking drugs. We used to have more confidence about telling people that not everything they wanted was good for them, and to have more self-control, and to think of how their decisions would harm others. Today, society has drifted away from objective moral boundaries and self-control toward subjective feelings and moral relativism, we are all finding it more difficult to tell people that they should choose to adhere to moral standards. We always seem to be looking to big government to make our irresponsible, reckless choices to be happy in the moment “work out” somehow.

Today, when people make poor decisions that wreck their families, hurt their kids, damage their health, etc. we are more likely to tax the people who haven’t been selfish and reckless in order to pay for government programs that “fix” the outcomes of the selfish, reckless people. In some countries, you can get free single mother welfare, free taxpayer-funded abortions, free sex-changes, free treatment for sexually-transmitted diseases, free rounds of IVF, and so on. Just do whatever you want and someone else who had more self-control than you did will pay for it for you. That’s why we have a twenty-trillion dollar debt, which we never had during the time when we still had the courage to tell people not to do things that were risky, and would be expensive to fix when they blew up.