“For the duration of the Administration’s 10-year budget, the deficit never falls below $700 billion, and never falls below 3.6 percent of GDP – a level the Administration’s own budget director has called ‘unsustainable.’ Debt held by the public doubles over 5 years, triples over 10,   and exceeds 60 percent of GDP as a share of the economy this year – surpassing last year’s 50-year high. Debt continues to rise to consume 77.2 percent of our economy by the end of the budget window. Even the countries of the European Union, hardly exemplars of fiscal rectitude, are required to keep their debt levels below 60 percent of GDP.

“The Administration will attempt to focus attention on a handful of proposals supposedly aimed at tempering the Federal Government’s explosive growth. But these have far more to do with calming Americans’ concerns than with doing anything to address them. His pay-as-you-go proposal has been waived or circumvented and only locks in deficits at their current high levels. His non-binding commission simply punts on the critical budget decisions that Members of Congress got elected to make. Finally, his so-called ‘freeze’ on some discretionary spending follows an 84-percent increase – and has no clear means of enforcement. 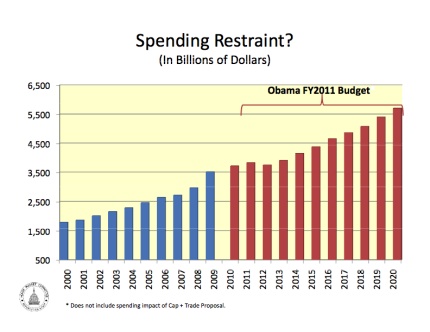 Second, debt held by public as % of GDP: 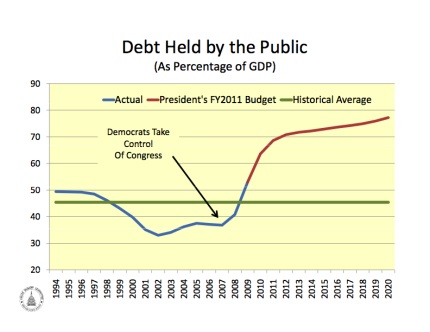 The problems started when the Democrats got control of Congress in late 2006. (The House controls spending) Talking about “spending freezes” on tiny amounts of the budget now has no effect because we are losing a trillion dollars-and-a-half dollars a year now. It’s just politics meant to deceive the people who still believe Obama’s honeyed words.

What is Paul Ryan’s alternative?

Neil Simpson posted a link to an overview of Paul Ryan’s plan.

Health Care
•    Provides a refundable tax credit — $2,300 for individuals and $5,700 for families — to purchase coverage in any state, and keep it with them if they move or change jobs.
•    Allows Medicaid recipients to take part in the same variety of options by using the tax credit to purchase high-quality care.

Medicare
•    Establishes and fully funds Medical Savings Accounts for low-income beneficiaries to cover out-of-pocket costs, while continuing to allow all beneficiaries, regardless of income, to set up tax-free MSAs.

Social Security
•    Offers workers under 55 the option of investing over one third of their current Social Security taxes into personal retirement accounts, similar to the Thrift Savings Plan available to federal employees.

Tax Reform
•    Provides taxpayers a choice of how to pay their income taxes – through existing law, or through a highly simplified income tax system that fits on a postcard with just two rates and virtually no special tax deductions, credits or exclusions (except the health care tax credit).
•    Promotes saving by eliminating taxes on interest, capital gains and dividends and eliminates the death tax.

Read the rest, and see if these ideas that promote saving and investing, instead of borrowing and spending, make more sense to you than Obama’s spending millions of taxpayer dollars on turtle tunnels.