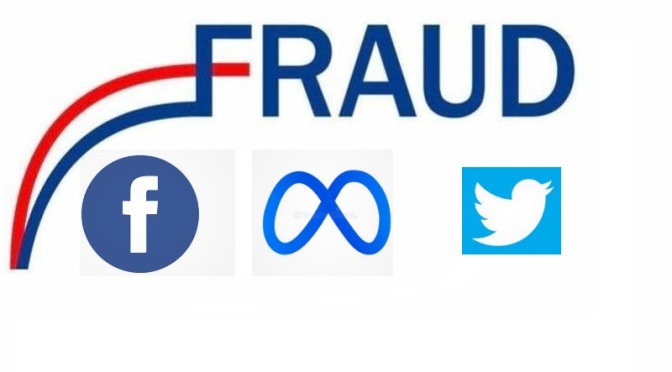 Let’s start with Glenn Greenwald, a progressive who has done excellent reporting about this story from the beginning.

One of the most successful disinformation campaigns in modern American electoral history occurred in the weeks prior to the 2020 presidential election. On October 14, 2020 — less than three weeks before Americans were set to vote — the nation’s oldest newspaper, The New York Post, began publishing a series of reports about the business dealings of the Democratic frontrunner Joe Biden and his son, Hunter, in countries in which Biden, as Vice President, wielded considerable influence (including Ukraine and China) and would again if elected president.

The backlash against this reporting was immediate and intense, leading to suppression of the story by U.S. corporate media outlets and censorship of the story by leading Silicon Valley monopolies. The disinformation campaign against this reporting was led by the CIA’s all-but-official spokesperson Natasha Bertrand (then of Politico, now with CNN), whose article on October 19 appeared under this headline: “Hunter Biden story is Russian disinfo, dozens of former intel officials say.”

These “former intel officials” did not actually say that the “Hunter Biden story is Russian disinfo.” Indeed, they stressed in their letter the opposite: namely, that they had no evidence to suggest the emails were falsified or that Russia had anything to do them, but, instead, they had merely intuited this “suspicion” based on their experience…

[…][A]s I noted last September, “virtually every media outlet — CNN, NBC News, PBS, Huffington Post, The Intercept, and too many others to count — began completely ignoring the substance of the reporting and instead spread the lie over and over that these documents were the by-product of Russian disinformation.” The Huffington Post even published a must-be-seen-to-be-believed campaign ad for Joe Biden, masquerading as “reporting,” that spread this lie that the emails were “Russian disinformation.”

Here is an example of how one mainstream news media outlet helped Joe Biden to win the 2020 election: 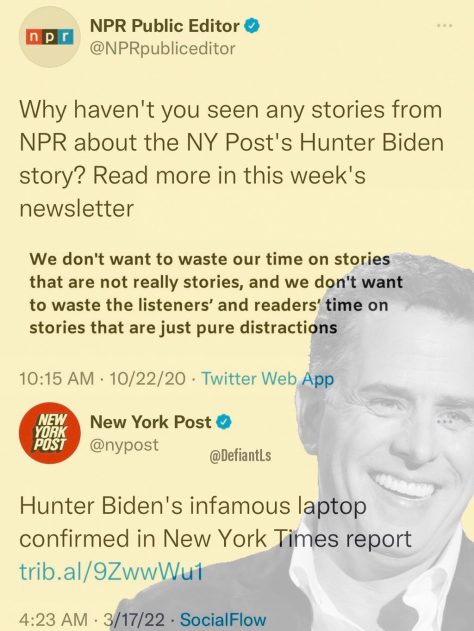 Here is what a Facebook spokesman said about the story: 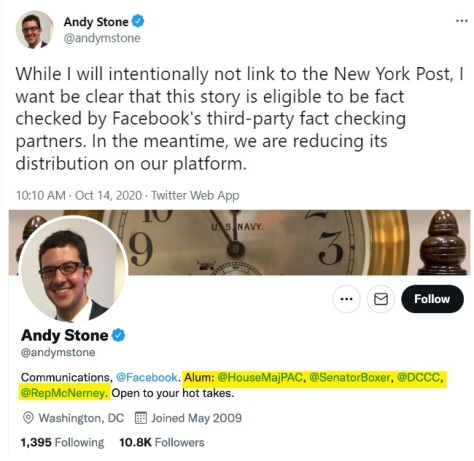 You’ll note in his bio that he is a Democrat, and has worked for Democrats. That didn’t disqualify him from working for Facebook – they are allies of the Democrat party. They regularly censor anything critical of the Democrat party, especially before important elections.

Twitter locked The New York Post’s Twitter account for close to two weeks due to its refusal to obey Twitter’s orders to delete any reference to its reporting. The social media site also blocked any and all references to the reporting by all users; Twitter users were barred even from linking to the story in private chats with one another. Facebook, through its spokesman, the life-long DNC operative Andy Stone, announced that they would algorithmically suppress discussion of the reporting to ensure it did not spread, pending a “fact check[] by Facebook’s third-party fact checking partners” which, needless to say, never came — precisely because the archive was indisputably authentic.

A link to the NEW YORK POST is “spammy or unsafe”. And you can bet they punished people who shared the story with shadow banning. Twitter is a vile proponent of censorship.

And of course the Biden administration has no comment on their previous attempts to dismiss the laptop as “Russian disinformation”.

This is what the Biden spokeswoman said:

White House press secretary Jen Psaki didn’t even bother trying to defend her past claim that The Post’s reporting on Hunter Biden’s laptop was “Russian disinformation” after the New York Times belatedly verified emails from the cache.

Psaki was pressed Thursday at her regular briefing about her own misleading remarks and those of then-candidate Joe Biden.

Psaki deflected without answering for Biden’s misinformation, which helped fuel Big Tech censorship of The Post’s reporting in the days prior to the 2020 election.

Surprise! She didn’t like being held accountable for her actions.

I blogged about the laptop on October 23, 2020. As poor as that post might have been, it was more accurate than all of the Democrat propagandists in Big Tech social media corporations and the mainstream news media outlets combined.

I can only think back now about the Christian-raised Democrat fools in my office who swallowed the Big Tech / Mainstream media narrative about the laptop. They believed anything they had to believe to pull that lever for Joe Biden. They put zero effort into investigating the facts. Elections, they reasoned, are about their feelings – their need to virtue signal to others. We are now paying the price for the mistakes of NPR-indoctrinated low-information Democrat voters. These are stupid, ignorant, lazy people.