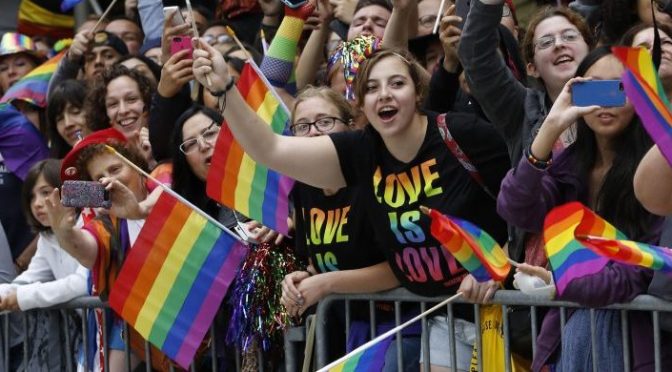 I have an ongoing disagreement with a female friend about how to restore marriage and family. We both agree on the harm that is done to children by the redefining marriage to remove the traditional marriage norms of exclusivity, permanence, heterosexual romance, etc. But she thinks that it’s better to approach men and get them to change, whereas I think it’s better to approach women and get them to change.

So, in a previous post, I argued that we should focus on telling women to stop choosing hot bad boys, and trying to get them to commit. I said this because I don’t think you can change the hot bad boys and make them commit. They want s3x, and that’s what they are getting when the normal women throw s3x at them. They don’t have to commit if they get what they want before committing.

But is there anything constructive to say to the normal men, who are not getting s3x thrown at them from many different women? Well, yes. There is something to say to them. Although they are not smashing up families, they are doing something wrong. They are giving attention to the wrong sort of women, for the wrong reasons.

Consider this article about the web site Only Fans, from Business Insider:

OnlyFans, the subscription-based adult-entertainment site, boomed during the pandemic.

Revenue at the UK-based company grew by 553% in the year to November 2020, and users spent £1.7 billion ($2.36 billion) on the site, a seven-fold increase, the Financial Times reported.

The site allows creators to sell video clips, photos, and messages directly to subscribers on a pay-per-view basis, with OnlyFans taking a 20% cut. Customers pay between $5 and $50 per month.

User numbers grew from 20 million before the pandemic to more than 120 million over 12 months, as adult entertainers and their customers signed up during lockdowns to share X-rated content.

Only Fans is a web site where the most impulsive and reckless women make easy money by showing off their bodies and performing s3xual activities for subscribers. It’s voluntary, not coerced. They want to get rich quick without having to care about doing well in school or getting a job. They aren’t interested in marriage, because they know that good men don’t marry women who make themselves available to millions of other men. They are not conservative. They don’t want men to lead them. They don’t read anything that makes them wiser or more noble. Men shouldn’t be paying women like this any money, or even giving them attention.

I want normal guys to give better women their time and money – preferably in a relationship, but at least in a friendship. Even if the majority of women are using their young and pretty years to try to land hot bad boys, there are always a minority of women who are busy with better things, like doing computer science degrees or reading Nancy Pearcey books. I think that the normal guys should be paying attention to them.

In fact, if I could just convince these normal guys to read more useful stuff, I’m sure they would realize that there is a lot more to a woman than youth and beauty. They would probably find the Only Fans girls pretty repulsive, once they realized how much different women can be if they are trained and prepared to commit to men and respect them. And by trained, I don’t mean “I’m a Christian, you can’t judge my past”. I mean bookshelves of good books, read and highlighted. I mean a public record of conservative Christian achievements.

If normal guys can’t find good young women to pay attention to, then they should try to make friends with older, wiser good women. That way, they won’t be lonely, they will learn something from the older more conservative women , and they will avoid making the wrong sort of women richer. I used to have a half-dozen older women advisors who would fill my head with wisdom chirped out in their cute girly voices whenever I wanted. Getting wisdom from conservative older Christian women is a lot better for me than throwing dollar bills at online strippers, who take your money, but have no interest in getting ready for marriage.

And if a younger woman came along who read good books, was conservative, and wanted marriage and children, you can start the marriage evaluation process. The important thing is to have the money to close the deal on a marriage if you find a real marriage candidate, which is why you don’t waste money on Only Fans women. Good women are the ones who trust you, respect your leadership, and achieve things when you lead and support them.

I don’t really care much about the Only Fans women, but I don’t think that getting attention and money for how you look is good for them in the long run. Women who get attention for stripping and doing s3x acts don’t learn anything that’s useful for them to be content in a stable marriage. They get used to seeing men at their worst, and they lose their ability to trust and bond with one guy. Giving them money to do something temporary that cannot be sustained as their looks fade isn’t good for them either. I don’t think it’s good for society long-term to have a bunch of shallow, immature women voting for bigger government and less liberty when they reach age 32 and can’t find good men to marry them.

Basically, what I would like is for men and women to get better at understanding moral character, religion and relationships, so they can choose quality relationship partners. And the best way to do that is what the Bible recommends – by renewing your mind. And how do you renew your mind? Well, you have to convince yourself that the world works a certain way. And how do you do that? By reading difficult challenging books that show you how to achieve the goals that are best for you, even if you have to sacrifice happiness in the short term. Men and women need to read better books.

I’m going to keep recommending to young people that they try to get out of the chaos of this generation by reading better books. Start with Philippians and John in the Bible. Then, I like “Is God Just a Human Invention?” by Sean McDowell and Jonathan Morrow, and “Total Truth” by Nancy Pearcey. Read some Thomas Sowell economics, and some military history. There is no shortcut to valuing good things, and making good decisions. You have to change your mind by keep out the culture’s junk, and putting in the good stuff.