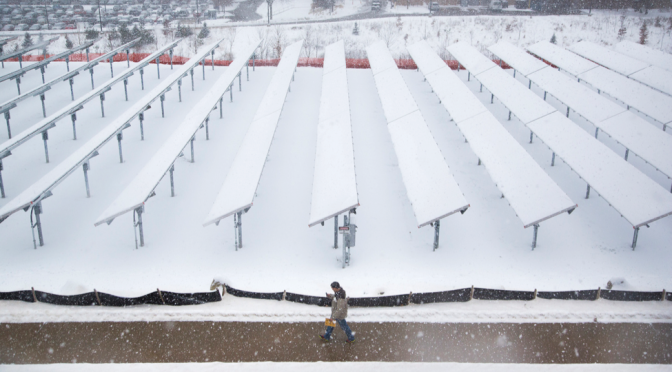 From the Washington Examiner:

By the time America gets back to work, and traffic jams, gas prices under the Biden administration could be heading back to $4 thanks to new climate regulations, the president’s shutdown of energy mining on federal lands, and overseas production cuts.

Industry experts believe that as the coronavirus vaccine becomes widely available, offices will start to fill up, as will gas stations.

[…]Since Election Day, gas and crude oil prices have jumped. In the United States, gas prices are up 18% and oil nearly 50%.

OPEC and the Saudis have also cut production in hopes of raising prices to offset a year of losses.

But does green energy work?

That’s just one green energy state. They have colder weather. So what about a warmer state?

Fox News reports on a state that is heavily invested in green energy:

About half of Texas’ wind power generation capacity has been put on ice amid the state’s historic winter storm, according to a report.

The Electric Reliability Council of Texas (ERCOT) told the Austin American Statesman that roughly 12,000 megawatts of Texas’ wind generation capacity had been hampered as of Sunday due to frozen wind turbines. However, they also noted that unfrozen wind turbines are spinning at a higher rate than expected, helping to offset the losses.

ERCOT operates Texas’ electric grid and manages the deregulated energy market for 75% of the state,

“This is a unique winter storm that’s more widespread with lots of moisture in West Texas, where there’s a lot of times not a lot of moisture,” ERCOT senior director of system operations Dan Woodfin told the outlet. “It’s certainly more than what we would typically assume.”

It is estimated between 2.5 and 3.5 million people in Texas have been left without power amid the storm’s frigid temperatures.

Democrats believe that big government is the solution to impending doom caused by human freedom and the free market. They believe this in spite of their past predictions being falsified for the last 50 years. They hate to talk about the Medieval Warming Period, when the Earth was much hotter than it is today. I tend to prefer beliefs that haven’t been falsified by evidence over beliefs that make me feel good and look good to people who talk for a living.

4 thoughts on “After Biden’s attacks on oil and gas, gas prices are up 18% and headed higher”