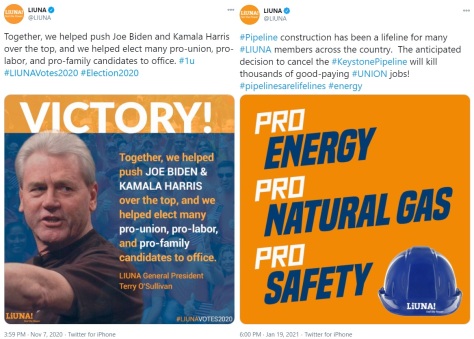 Let’s start with the radical feminists.

One of the first acts of Joe Biden’s presidency was to gut sex anti-discrimination laws and eliminate critical protections for women in the federal government.

[…]This executive order directs federal agencies to do two things. First, federal agencies are now required to interpret “sex” as also including “sexual orientation and gender identity” in their own internal regulations and workplace policies.  Second, agencies are directed to perform a comprehensive assessment of all regulations under their purview, and create a plan with 100 days to “revise, suspend, or rescind such agency actions, or promulgate [propose] new agency actions”  that will impose this interpretation onto all American employers, institutions, and individuals, with no exceptions.

This is the part that made me laugh out loud:

While we strongly support protections from discrimination based on sexual orientation, the Biden administration has grossly expanded the application of the decision with far-reaching implications for women’s rights in nearly every aspect of public life, including Title IX.

This isn’t an expansion of the feminist denial of sex differences. It’s exactly what they wanted all along. When feminists say that that males and females are identical and all perception of sex differences is “discrimination”, then they shouldn’t be surprised when people take them seriously.

Meanwhile, labor unions – never hotbeds of economic literacy – are beginning to realize that the socialist agenda they endorsed isn’t going to result in prosperity. Who knew?

The United Association of Union Plumbers and Pipefitters (UA) today announced that the UA Political Engagement Committee (PEC) has concluded its endorsement process with a decision to endorse former Vice President Joe Biden for President.

“We’re not going to sit on the sidelines at the UA. This endorsement is about putting UA members to work and fighting for fair wages and good benefits. Under a Biden Administration, that’s exactly what we’ll get,” said Mark McManus, General President of the United Association.

Fair wages and good benefits! That’s what they expected from a far-left Marxist funded by radical eco-fascists.

The United Association of Union Plumbers and Pipefitters (UA) issued the following statement today following the news that the Biden-Harris Administration plans to rescind the permit and effectively end construction on the Keystone XL pipeline:

“The Biden Administration has now put thousands of union workers out of work. For the average American family, it means energy costs will go up and communities will no longer see the local investments that come with pipeline construction,” said Mark McManus, General President of the United Association.

Just to note, the Biden plan to kill the pipeline was announced before the union endorsed him. BEFORE.

If you are dealing with a leader of a labor union, the one thing you know for certain is that this person has zero understanding of basic economics or history – specifically, the historical outcomes of implementing socialist policies. Union leaders either have no idea how the world works, or they’re just corrupt. Or both.

Ordinary Americans will be hit, too

Biden is planning to raise the minimum wage to $15, which should result in one million Americans losing their jobs, since their employers won’t be able to pay them more to produce the same amount.

The Biden plan also ends the tipped minimum wage, an absurd proposal considering 10,000 restaurants have closed their doors in the last three months alone. Imposing a 600 percent minimum wage increase on an already struggling industry in the middle a recession would only lead to more closures. If Biden is successful, one in three tipped workers would lose their job.

It was tried at the state level and it failed:

A $15 minimum wage has repeatedly failed at the state level. When Seattle implemented a $15 minimum wage, thousands of jobs were lost, while other workers saw a reduction in hours worked. New York City’s minimum wage increase forced 75 percent of restaurants to cut employee hours, and nearly 50 percent to eliminate jobs entirely.

This will be a hard life lesson for people who voted for this policy, then get affected by it.

Just so you know, the elimination of small businesses is a necessary step in the implementation of communism. The more the market is reduced to a few wealthy monopolies, the easier it is for government to step in and take control. The government’s job is to promote small business, so that consumers benefit from choice and competition. But that’s exactly the opposite of what communism requires.