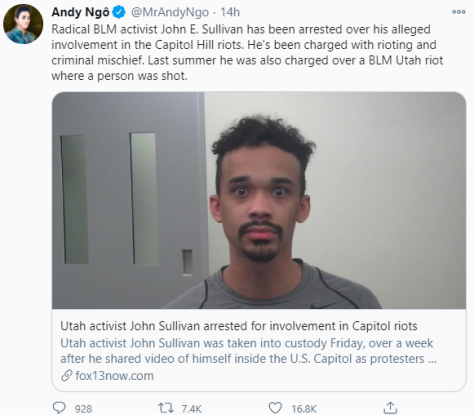 A left-wing activist who told Fox News last week that he’d followed a pro-Trump mob into the Capit0l in order to “document” the siege is now the subject of a criminal complaint in connection with his alleged participation, according to the Justice Department.

J0hn Su11ivan can allegedly be heard egging on protesters in video he provided to the FBI, according to a federal criminal complaint. He has also shared the video to his YouTube and Twitter accounts under the pseudonym Jayd3n X.

He was charged Thursday in federal court in Washington, D.C. after being arrested by the FBI. He remains in custody in Toeele County, in his home state of Utah, on a U.S. Marshals Service hold request.

Inside the building, he told rioters that “We gotta get this s— burned,” and “it’s our house m————,” according to an affidavit signed by FBI Special Agent Matthew Foulger.

[…]Su11ivan, the founder of a Utah-based group called 1nsurgence USA… has denied ties to Ant1fa in recent interviews, his group 1nsurgence USA had advertised an event called “Kick These Fascists out of DC” on Wednesday around the same time as a pro-Trump rally near the National Mall that preceded the Capit0l chaos.

If you’re wondering why I said “incitement of violence” in my title, it’s because I think that “we gotta get this s— burned” is an incitement to violence.

Su11ivan, the founder of “an activist group formed after the killing of George Floyd in the summer of 2020” entitled 1nsurgence USA which “calls itself anti-fasc1st and protests police brutality,” insisted he was only inside the U.S. Capit0l on January 6th to “record.”

Politifact, which is one of the fake-news “fact-checkers” employed by Big Tech, issued an entire fact-check, in which they claimed that this person isn’t linked to Ant1fa at all:

Social media users have linked Su11ivan to ant1fa and Black Lives Matter because of his past protest history and social media activity. His Twitter accounts have frequently used #antifa, #blm, and other anti-Trump or anti-police hashtags, PolitiFact found. The cover photo for one of his accounts advertised a Jan. 6 1nsurgence USA event to “Kick These Fascists Out of DC.”

Su11ivan has also been filmed using incendiary language in the past. At a small August rally in Washington, D.C., he described the need to “rip” Trump out of office, according to Fox News. Photos highlighted on his personal website show him holding a firearm.

But Su11ivan said he’s not a part of the ant1fa coalition often blamed for violent events, noting that Trump supporters at the riot were shouting “f— ant1fa.”

So if he says he’s not linked to Ant1fa, then he’s not linked to Ant1fa. That’s called journalism. No need to check any evidence. That’s real journalism with a journalism degree right there. That 200K in student loans was well worth the money, for the useful journalism skills you learn when you’re spending 4 years being a drunken slut and getting indoctrinated with far-left propaganda till you can’t reason your way out of a paper bag. But Big Tech has a use for you.

This fact check was used by Big Tech corporations like Facebook to suppress any criticism of far-left fascist groups. That’s their goal. The journalists write their “fact check”, they label your actual facts “missing context” or “mostly false” and then every dissenting voice is banned from social media. I remember when they labeled a video of Joe Biden talking as “Missing Context” and reduced my page’s audience for quoting Joe Biden in his own words talking continuously for over 2 minutes. They just didn’t want people to see it, so they censored it. They censored me. They hate free speech. They’re totalitarians who suppress anything they disagree with.