Here’s a wonderful post on decision making and the will of God posted on Neil’s blog. Neil links to another post where someone is trying to figure out what God wants him to do.

Using this model you can end up with a wise and biblical decision, but you have avoided the traps of the “God told me to ____” routine.  People who run around saying that God told them this and that convey a super-spirituality that can leave less mature believers wondering if they really have a relationship with God (i.e., “God doesn’t tell me every little thing to do, so maybe I don’t really know him.”).

He has a helpful picture posted as well: 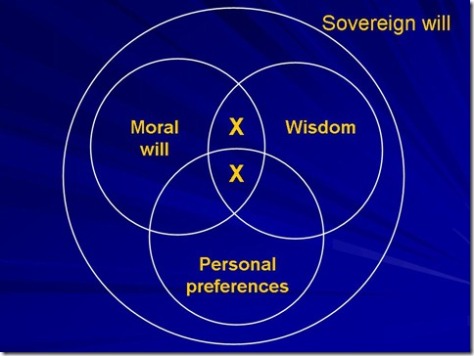 This is actually a very important topic for me, because I like making plans and making good decisions. I like being the quarterback or squad leader of my own life. I like to pick objectives and then make plans to achieve them. (Nothing too exotic, just simple stuff like saving money or reading more books)

Actually, I really oppose the idea that God has a magical fairy tale will for each person that will make them happy and fulfilled. For me, life isn’t like that. I don’t expect God to lead me along like a child at a scavenger hunt. I expect to survey the battlefield where I am and then do something to make a difference. There are lots of things you can do that will please God. Should you focus on your career and sponsor apologetics conferences? Or should you use your spare time preparing Sunday school lessons? There are lots of good things you could do to please God. Your job is to pick the one that will be the most effective. It doesn’t matter if it makes you happy, it only matters if it’s effective and if you are good at it.

Who is Rifleman Dodd?

A while back, I was busily working my way through the U.S. Marine Corps Official Reading List, and I came across a book by C.S. Forester called Rifleman Dodd, or alternatively titled Death to the French. It’s a work of historical fiction that takes place during the Napoleonic wars. The story is about a British marksman named Dodd, who is cut off from his own lines during a withdrawal maneuver. He is subsequently left to fend for himself behind enemy lines. An ordinary man might be full of despair and forget about his mission entirely. But Dodd is no ordinary man. Not only does he find a way to survive by finding food to eat, water to drink and places to sleep, but he also tries to remember his orders and to think about what he can do to advance the cause of his General, the Duke of Wellington.

Here’s an excerpt from a gritty book review:

It’s about a green-coated British infantry rifleman in the Napoleonic Wars, an age when rifles were a novelty and most of the army was red-coated and carried muskets. Private Matthew Dodd gets separated from his regiment during a retreat and finds himself stranded behind enemy (French) lines in Portugal. With the occasional aid of some natives, but mostly on his own, he harasses the French with his rifle and tries to prevent them from building a bridge across the Tagus River. It’s a remarkable tale of survival and solitary achievement, of a rank-and-file soldier who lives by his wits and slowly learns to make plans without orders, and shows leadership qualities and a knowledge of warfare.

I think we’re in the same situation as Dodd.

There is no point in us looking for breadcrumb trails to happiness at this point. That’s not the point of Christianity. The point of Christianity is friendship with God, imitation of Christ, honoring moral obligations, self-sacrificial love for your neighbor (and even your enemies!), and dedication to the truth – whether anyone else likes you or not. It’s not supposed to make you happy, and it’s not necessarily going to be a normal life like everyone else has. Things may not work out the way you’d like them to.

We seem to be making such a big deal about compassion and forgiveness in the Christian life these days – such a big emphasis on our feelings. Almost like we have forgotten that we have obligations to our friend – and his objectives. A relationship doesn’t mean that one person completely disregards the character and goals of the other person and then is automatically granted forgiveness whenever they want it. That’s not a friendship – that’s using someone else for your own ends. Maybe it’s time to remember what this is all about.

7 thoughts on “Are Christians responsible for making plans and making good decisions?”