The Declaration of Independence

You can listen to conservative writer Scott Ott reading the Declaration of Independence here, and follow along with the complete text here.

The best book to read about the Revolutionary War is David McCullough’s 1776, which I highly recommend. The audio book version is awesome.

George Washington and the American Revolution 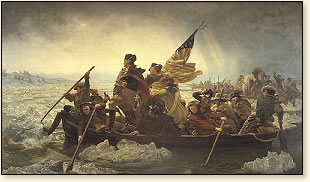 To really understand the founding of the United States, you should read about the story of Washington crossing the Delaware. At this point in the Revolutionary War, the British commanders had achieved a stunning series of victories against the Americans. They had even sent word home to the King that the war was over, and that the Americans would be forced to surrender. But Washington did not give up. He attacked the British forces and took them by surprise – and he won the Battle of Trenton! That was the turning point of the war. There almost never was a United States of America – that’s how close the revolution came to failing.

Here is a portion of Ronald Reagan’s farewell speech:

I’ve spoken of the shining city all my political life, but I don’t know if I ever quite communicated what I saw when I said it. But in my mind it was a tall proud city built on rocks stronger than oceans, wind-swept, God-blessed, and teeming with people of all kinds living in harmony and peace, a city with free ports that hummed with commerce and creativity, and if there had to be city walls, the walls had doors and the doors were open to anyone with the will and the heart to get here. That’s how I saw it, and see it still.

And how stand the city on this winter night? More prosperous, more secure, and happier than it was eight years ago. But more than that; after two hundred years, two centuries, she still stands strong and true on the granite ridge, and her glow has held steady no matter what storm. And she’s still a beacon, still a magnet for all who must have freedom, for all the pilgrims from all the lost places who are hurtling through the darkness, toward home.

This is no ordinary nation.

Whenever I drive on long trips, I always practice singing “The Star-Spangled Banner” and “America the Beautiful”.

Even if you are not an American, you can be an honorary American, just for today, if you sing the songs below. God knows that there are other people in the world that love freedom and look to the United States as the model.

If we fall now, then you other freedom-loving people abroad must be ready to pick up the torch!

“Oh, say can you see by the dawn’s early light
What so proudly we hailed at the twilight’s last gleaming?
Whose broad stripes and bright stars thru the perilous fight,
O’er the ramparts we watched were so gallantly streaming?
And the rocket’s red glare, the bombs bursting in air,
Gave proof through the night that our flag was still there.
Oh, say does that star-spangled banner yet wave
O’er the land of the free and the home of the brave?

On the shore, dimly seen through the mists of the deep,
Where the foe’s haughty host in dread silence reposes,
What is that which the breeze, o’er the towering steep,
As it fitfully blows, half conceals, half discloses?
Now it catches the gleam of the morning’s first beam,
In full glory reflected now shines in the stream:
‘Tis the star-spangled banner! Oh long may it wave
O’er the land of the free and the home of the brave!

And where is that band who so vauntingly swore
That the havoc of war and the battle’s confusion,
A home and a country should leave us no more!
Their blood has washed out their foul footsteps’ pollution.
No refuge could save the hireling and slave
From the terror of flight, or the gloom of the grave:
And the star-spangled banner in triumph doth wave
O’er the land of the free and the home of the brave!

Oh! thus be it ever, when freemen shall stand
Between their loved home and the war’s desolation!
Blest with victory and peace, may the heav’n rescued land
Praise the Power that hath made and preserved us a nation.
Then conquer we must, when our cause it is just,
And this be our motto: “In God is our trust.”
And the star-spangled banner in triumph shall wave
O’er the land of the free and the home of the brave!”

“O beautiful for spacious skies,
For amber waves of grain,
For purple mountain majesties
Above the fruited plain!
America! America!
God shed his grace on thee
And crown thy good with brotherhood
From sea to shining sea!

O beautiful for pilgrim feet
Whose stern impassioned stress
A thoroughfare of freedom beat
Across the wilderness!
America! America!
God mend thine every flaw,
Confirm thy soul in self-control,
Thy liberty in law!

O beautiful for heroes proved
In liberating strife.
Who more than self their country loved
And mercy more than life!
America! America!
May God thy gold refine
Till all success be nobleness
And every gain divine!

O beautiful for patriot dream
That sees beyond the years
Thine alabaster cities gleam
Undimmed by human tears!
America! America!
God shed his grace on thee
And crown thy good with brotherhood
From sea to shining sea!

O beautiful for halcyon skies,
For amber waves of grain,
For purple mountain majesties
Above the enameled plain!
America! America!
God shed his grace on thee
Till souls wax fair as earth and air
And music-hearted sea!

O beautiful for pilgrims feet,
Whose stem impassioned stress
A thoroughfare for freedom beat
Across the wilderness!
America! America!
God shed his grace on thee
Till paths be wrought through
wilds of thought
By pilgrim foot and knee!

O beautiful for glory-tale
Of liberating strife
When once and twice,
for man’s avail
Men lavished precious life!
America! America!
God shed his grace on thee
Till selfish gain no longer stain
The banner of the free!

Here is my favorite version of America the Beautiful, sung by Ray Charles. This is the same version you hear on the Mark Levin show on Friday. Perfection.

Put your suggestions for more songs and speeches in the comments!

Remember to be grateful for the Founding Fathers, and other patriots, who risked everything for liberty in the Revolutionary war. Be grateful to those men and women still fighting abroad to keep those freedoms safe from evil. And most of all, be grateful to God that America is still the beacon of liberty.