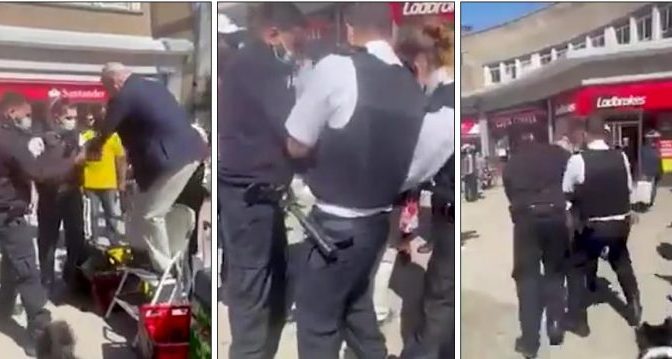 I think it’s important for American Christians to learn lessons about what happens to religious liberty by looking at what happens to Christians in other times and places when Democrats (secular leftists) take power. This time, let’s look at a story from the UK, which has been on a 30-year-run into far-left socialism. They’ve embraced atheism, feminism and socialism. Here’s the result.

A Christian pastor who was arrested after he preached from the Bible said yesterday he had been treated ‘shamefully’.

John Sherwood, 71, was led away in handcuffs, questioned in a police station and held overnight after being accused of making homophobic comments outside Uxbridge Station in west London.

The grandfather claimed he was left bruised after police pulled him from a mini-stepladder he was using and cuffed his hands behind his back.

Police said they had received complaints the man had been making ‘allegedly homophobic comments’ and arrested him under the Public Order Act, which can be used under the vague proviso that someone is using ‘abusive or insulting words’ that cause ‘harm’ to someone else.

[…]Mr Sherwood, a pastor for 35 years, said: ‘I wasn’t making any homophobic comments, I was just defining marriage as a relationship between a man and a woman. I was only saying what the Bible says – I wasn’t wanting to hurt anyone or cause offence.

‘I was doing what my job description says, which is to preach the gospel in open air as well as in a church building.

‘When the police approached me, I explained that I was exercising my religious liberty and my conscience. I was forcibly pulled down from the steps and suffered some injury to my wrist and to my elbow. I do believe I was treated shamefully. It should never have happened.’

Mr Sherwood, who preaches at an independent evangelical church in north London, was arrested under the Public Order Act for allegedly causing alarm or distress.

Before we go too far, let’s just settle the question of what Bible-believing Christians should believe about the definition of marriage.

1 Now when Jesus had finished these sayings, he went away from Galilee and entered the region of Judea beyond the Jordan.

2 And large crowds followed him, and he healed them there.

3 And Pharisees came up to him and tested him by asking, “Is it lawful to divorce one’s wife for any cause?”

4 He answered, “Have you not read that he who created them from the beginning made them male and female,

5 and said, ‘Therefore a man shall leave his father and his mother and hold fast to his wife, and the two shall become one flesh’?

6 So they are no longer two but one flesh. What therefore God has joined together, let not man separate.”

To be a Christian, minimally, is to be a follower of Jesus Christ. That means that we accept what Jesus teaches, on whatever he teaches about. We don’t overturn the teachings of Jesus in order to make people who are rebelling against God feel better about their rebellion. It is central to the Christian worldview that Christians care more about what God thinks of them than what non-Christians think of them. In fact, Christians are supposed to be willing to endure suffering rather than side with non-Christians against God’s authority.

Matt Walsh had a fine article about this issue.

As Christians, our goal is not to avoid being like the big bad “other Christians,” but to strive to be like Christ Himself. This is one of the advantages to having an Incarnate God. He went around acting and speaking and teaching and generally functioning in our realm, thereby giving us a model to follow. This is the model of a loving and merciful man, and also a man of perfect virtue who fought against the forces of evil, condemned sin, defended his Father in Heaven with sometimes violent force, spoke truth, and eventually laid down His life for those He loved (which would be all of us).

[…]This is what it means to believe in Christ. Not just to believe that He existed, but to believe that Christ is Truth itself, and that everything He said and did was totally and absolutely and irreversibly true forever and always. Many Christians today — not only the ones in the video, but millions alongside them — seem to think we can rightly claim to have “faith” in Jesus or a “relationship” with Him while still categorically denying much of His Word. This is a ridiculous proposition. We can’t declare, in one breath, that Christ is Lord, and in the next suggest that maybe God got it wrong on this or that point. Well, we can make that declaration, but we expose our belief as fraudulent and self-serving. We worship a God we either invented in our heads, which is a false idol, or a God who is fallible, which is a false idol.

If you really accept Jesus as God, then you can’t think he is wrong when he explains what marriage is. Period. End of issue. And yet today, so many church-attending Christians are anxious to change the definition of marriage so that non-Christians will like them.

Why are some church-attending Christians  so progressive?

So, I have quite a few evangelical Christian acquaintances who think they are Christians because they got married, had kids and attend church. You know. They’re “Christians” culturally. But instead of thinking about what policies are supported by the Bible, all their policy-deciding is done for them by NPR, CNN, MSNBC, the New York Times, etc. That’s because they want to appear “smart” to non-Christians. And having to read books on your own by people like Thomas Sowell (economics), Heather Mac Donald (crime), Douglas Murray (immigration), John Lott (self-defense), Christopher Kaczor (abortion), Ryan T. Anderson (marriage), etc. is just TOO MUCH WORK. Reading is hard. It makes churchy Christians feel bad. Much better to watch Star Wars / Ellen and read fantasy / romance novels and buy video games / hand bags.

The point of having political views, they say, is to look smart and good to others. Not to promote policies that are consistent with the Bible, or that allow Christians to act consistently with the Bible. So you get church-attending Christians voting against small government, free speech, religious liberty, the rule of law, private property, school choice, etc. because forming beliefs by consuming secular left radio and TV is easier than reading.